What does it take to land a large-company CFO position, and how can female finance executives position themselves for the top spot?

Neetu Kashiramka strongly believes that dedication and zeal are two main factors for anyone who aspires to reach the top. Reminiscing from her childhood days, she says that growing up in a Marwari family, a lot of distinction was made between the male and female children of the house. For instance, Neetu’s brother was always given more toys and gifts by her grandmother. Nevertheless, from an early age, she would say that one day her parents will be known as Neetu’s mom and dad. Neetu’s parents were always confident of her daughter’s future success.

Neetu would often say that after growing up, she will earn ₹ 10,000 to which she would get laughed at, since it was a big amount in those days. However, her determination to achieve was such that she would start her day before 6 am and end it by 10 pm every night. Often, the society would tell Neetu’s parents to keep their daughter in check and not let her take control of her life, however, her parents trusted her completely with her own life choices.

When it was time for Neetu to settle down, all the boys whom her parents met would place a condition that they didn’t want a working wife. But Neetu was firm that she wouldn’t let her education go to waste and she wanted that the decision to work or not to work should entirely be hers and not be imposed on her.

“If I am able to manage both home and work then ideally there should be no reason for me to not work.”

Neetu took a bold step to somehow find her prospective husband’s phone number from yellow pages and made him understand her perspective of working after marriage. He appreciated this a lot and they would later on end up getting married. She further says that she has been very fortunate to have open-minded in-laws. Her confidence, family’s support, and her ‘ask and you shall receive’ attitude have been very important in her journey.

“It is important that freshers should not always chase big brand names or companies, rather focus on learning. If you only chase brand names, you’ll never become a brand in yourself”. Neetu adds, “Be sure not to get lost in the crowd. It’s essential to involve yourself in the grassroot level of every function, to ensure your growth and learning.”

She advises not to be afraid in taking up meaningful roles in small organisations even if it means compromising on your pay in short-term. She narrates a personal incident wherein once a new CEO who had joined her company saw that Neetu was grossly underpaid and increased her remuneration by nearly fifty percent!

Primary skills a CFO should possess:

“CFOs should always be a part of major business decisions and companies should ensure to involve CFOs in all strategic moves. CFOs should function as a partner, not as an impostor, for their company’s businesses. CFOs should possess an ability to effectively convince people in a manner such that they ultimately decide what’s best, keeping a CFO’s advice in mind. Don’t just identify problems, come up with workable solutions and take an overall business perspective while doing so.”

She treats everyone with equal dignity and compassion irrespective of what position they hold in the organisation. She believes in giving credit where credit is due to her team members which makes her likable and respected amongst them.

What are some of challenges that you faced early on in your career and how did you overcome them?

Since travelling was a problem during her initial employments, Neetu decided to move close to office. She recalls seeing an advertisement from Jyothy Labs that said that only women should apply. This inspired her to work for this organisation since in those times, advertisements for finance roles would explicitly say that only men should apply. She says, “the Managing Director of Jyothy Labs respected women a lot and told her that females are natural multi-taskers and very loyal and by giving a job to a woman, she earns the respect of her family, and she will put in her best foot forward at work.”

When Neetu joined her former company, it was growing at an exponential rate and its systems needed organising. Neetu saw this as an opportunity to prove herself and to showcase her talent through hard work. In fact, she even bought a translator book and learnt Malayalam to perform better. Initially, she faced some resistance at work since people more than twice her age were put to work under her and report to her. But Neetu decided to concentrate on doing good for the company and not let these small distractions deviate her from her path.

Neetu remained focussed on her work and capabilities and eventually, these minor obstacles vanished. Her first achievement at Jyothy Labs was implementation of a customised enterprise resource planning (ERP) in 2003 at 68 locations across India. After this, there was no looking back for Neetu’s career graph. She was responsible for initial public offering of Jyothy Labs which oversubscribed by 48 times, a major private equity transaction, and some notable acquisitions. Neetu spent over seventeen years of her career at Jyothy Labs, and then decided to took the next big leap when she landed her present role as the CFO of Greaves Cotton. She took the bold step of choosing growth over her comfort.

“Even when I moved to Greaves Cotton, I respected everyone’s needs and did not impose change, rather involved everyone in the collective process of change.”

“I always saw an opportunity in the most difficult of situations at work. I identified problems within my organisations, and properly solved them, thereby earning brownie points.”

One of the problems she recalls solving was bringing down the working capital from 45 days to 20 days in only a matter of six months.

She always believed in taking up challenging roles, rather than simply maintenance roles. She was selective of opportunities that came before her whilst she was planning her career progression.

What can be done to improve the percentage of women in top executive or leadership roles?

“It’s imperative that top management encourages and believes in the ability of a woman professional. Don’t take a biased view simply on face value that a woman will give more importance to her family, as compared to her work. Evaluate a person on the basis of his/ her capabilities rather than gender.”

What is the one mistake that any company’s CFO should be wary of?

“Since all major business decisions involve finance, it’s important to take an overall perspective of the business as a whole and not just of the finance function in isolation.”

How can a working woman strike a balance between professional and personal lives?

Neetu says that she did not take any break post her marriage, and continued working. With the support of her family, she was able to transition successfully into her married life and set up a new home in the city.

Later on, when she had her first child, she received the support of a kind lady who took care of her kids when they were hardly a few months old. Neetu is extremely grateful for her support and says she also owes her career to this nice woman who took care of her kids when she was making tough decisions at work. She has always taken a balanced approach at the time of choosing between her work and family even in difficult personal situations.

“In the end, it is about your mindset wherein you need to assess every situation that requires you more.” She starts her day early and ends on time. She says, “Once you prove yourself, set your own rules.”

Women Who Make A Difference

Graduate in commerce, The University of Mumbai

Number of years of work experience:

Best piece of advice you would like to pass on: Be patient and persevere, always believe in yourself. Remind yourself that you are the best.

Dream: To be the CEO of a reputable organisation 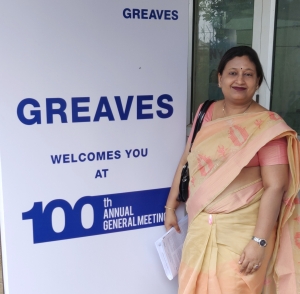